School of Deaths
​The Scythe Wielder's Secret: Book One 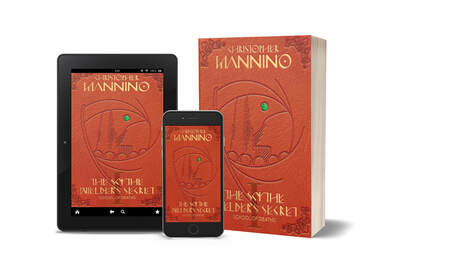 Thrust into a world of men, can a timid girl find bravery as the first female Death?

Thirteen-year-old Suzie Sarnio always believed the Grim Reaper was a fairy tale image of a skeleton with a scythe. Now, forced to enter the College of Deaths, she finds herself training to bring souls from the Living World to the Hereafter. The task is demanding enough, but as the only female in the all-male College, she quickly becomes a target. Attacked by both classmates and strangers, Suzie is alone in a world where even her teachers want her to fail.

Scythes hungry for souls, Deaths who enslave a race of mysterious magicians, and echoes of an ancient war with Dragons.

As her year progresses, Suzie suspects her presence isn't an accident. She uncovers a plot to overthrow the World of Deaths. Now she must also discover the reason she's been brought there: the first female Death in five thousand years.

​This thrilling young adult fantasy has been compared to Harry Potter, Percy Jackson, and the Hunger Games.

Listen to a sample from the audiobook, narrated by Joel Froomkin, HERE

Available in ebook, paperback, and audiobook.
"Not just a book for young adults, but an imaginative read for everyone. 5 Stars!" - Reader's Favorite

THE STORY CONTINUES IN SWORD OF DEATHS, THE SCYTHE WIELDER'S SECRET: BOOK TWO
Review on OnlineBookClub.  "This book's world is brilliant, and the author's creativity is more than amazing and the way he conveyed his imagination was just stunning. I would positively say he has a wild imagination. I would like to praise him on his great work, and I look forward to reading from him again."
Booktuber Sasha Alsberg of A Book Utopia says "If you like Harry Potter, you'll love this!":
Booktuber Kevin Kelly of IrishReader says "Such an Amazing Book, I can't wait to read the next one."
Siobhan's Book Corner gives it "Five cups of tea":
Amazon Reviews:  http://www.amazon.com/product-reviews/B00K2GC12M/

Goodreads reviews for School of Deaths

Reviews from Goodreads.com
Powered by